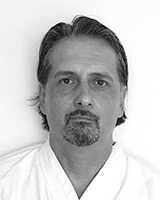 Senpai Arpad (Arpi) Vamosi (2nd Dan), started training in 1985 in Hungary and after moving to New Zealand joined the North Harbour Dojo in 2014. During the years he competed on national and international level, trained together with teams from across the world, such as Japan, America, Canada and Russia. This worldwide experience allowed him to combine the traditional karate with modern training methods. 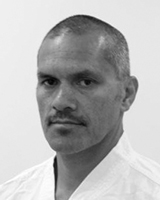 Shihan Stephen Takiwa (6th Dan) first started his Kyokushin Karate training in Hastings in 1978, at the age of 16. At the young age of 20 he opened the North Harbour dojo and was running it with his wife Diane for over 30 years. 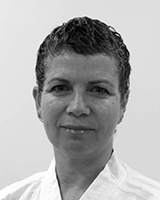 Shihan Diane Takiwa, (5th Dan) has been praticing Kyokushin Karate since 1982. When she and Shihan Takiwa moved their young family north (back to her home town Auckland) in ’82 she was one of the first students of the new club (back then) on the North Shore, Auckland. 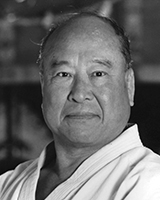 Mas. Oyama trained hard under various teachers and made great progress, becoming a 4th Dan at the age of 22. Two years later, in 1947, he won the All Japan Karate Championship.

In 1948, Mas. Oyama decided to undergo the rigors of training alone in the mountains. This he did on Mt. Kiyosumi in the Chiba Prefecture, where he stayed for 18 months, training daily to strenghthen his body and spirit.

It was in 1950, after returning from the mountains, that Mas. Oyama first started matching his strength against that of a bull. He fought a total of 52 bulls, killing three and breaking the horns off of 40.

In 1954, Mas. Oyama made his first of many visits to North America where he held numerous demonstrations and participated in many fights against boxers and wrestlers. He won all fights he participated in.

In 1954, he opened his first dojo in Tokyo. This dojo was the beginning of the KYOKUSHINKAIKAN. In 1964, the Tokyo Honbu was officially opened and the International Karate Organization-Kyokushinkaikan (I.K.O.K.) was established. Kyokushin Karate today is one of the largest and most famous of all karate styles 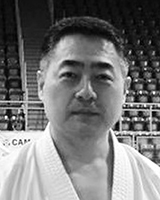 Shokei (Akiyoshi) Matsui (8th Dan) started Kyokushin Karate at the age of 13. In 1976, he joined the Kita Nagare-Yama Dojo in the Chiba prefecture of Japan, managing to achieve Shodan (first degree) Black Belt in a little over a year. In 1980, Matsui placed fourth in the 12th All Japan Open Karate Championships when he was just 17. Soon after, he became Chief Instructor of the International Kyokushin Headquarters School, “Honbu” Dojo in Tokyo, Japan.

Both in 1981 and 1982, Matsui took 3rd Place in the All Japan Open Karate Championships and then 8th place at the same event in 1983. He earned worldwide recognition and admiration for his amazing spirit, strength, and determination when he took a remarkable Third place finish at the 3rd World Open Karate Tournament in 1984. He succeeded in winning the All Japan Championships in each of 1985 and 1986, and then successfully completed the ultimate Kyokushin challenge, the “100 Man Kumite” in record time. In Japan, he became known as the man of “unparalleled genius”, one who comes along but once in an eon, and then in 1987 became the youngest ever Champion of the World.

In May of 1992, Matsui opened his own school in Asakusa, Tokyo and was later appointed Branch Chief by Sosai Mas Oyama. On April 26, 1994, founder Sosai Mas Oyama regrettably passed away, leaving the Directorship of the worldwide organization to Matsui, who became “Kancho” (Director). In the wake of the Sosai’s untimely death, and despite the well-documented backlash concerning his appointment, Kancho Matsui forged ahead that year staging the 11th All Japan Weight Tournament and the 27th All Japan Championships, the latter with a record 16,000 spectators in attendance. The following year, he produced the hugely successful, 6th World Open Karate Tournament, to which 168 fighters from all over the world competed and more than 25,000 spectators witnessed and he has continued hosting this prestigous event with the completion of the 10th World Tournament in November 2011.

By sharing knowledge with our members in a safe and supportive learning environment, we will instill a sense of humility, discipline and confidence. Therefore providing a stable foundation for a stronger community.

We are committed to building Kyokushin Karate in New Zealand. As a dojo operator of the NZKOK Inc. you will have the advantage of being connected to a global organisation, dedicated to providing continual support and guidance needed to develop yourself, your dojo and your students.

Kyokushin Karate will welcome you into a friendly supportive environment. Guiding you on a path to knowledge, challenging you both mentally and physically, enabling you to maximise your full potential.